By teaching our students to think, care, and act, we empower them to build a peaceful future.


Welcome to Think, Care, Act, where teachers and students can find rationales and resources to infuse required curricula with peace, character, global, and multicultural concepts throughout the year.

To act in a world whose problems seem overwhelming requires being able to use the powers of critical and creative thinking and compassionate and inclusive care. Employing these tools, adults and youth alike can work effectively and conscientiously to solve problems big and small, global and local. 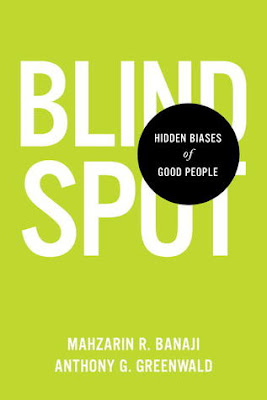 “[S]tereotyping is an unfortunate by-product of the otherwise immensely useful human ability to conceive the world in terms of categories.” (Blindspot, p. 89)
“I regard awareness to be a singularly important experience because the problem lies in the lack of awareness. When good people discover their blind spots, they are inherently motivated to wish to change….” Mahzahrin Banaji (email interview in Workforce, 2014)

Let’s resume our virtual Diversity Book Club.  In previous and upcoming posts, I summarize books and provide classroom applications and resources for teachers interested in building welcoming and inclusive environments in their classrooms and schools.  We continue with Blindspot: Hidden Biases of Good People, by Mahzahrin R. Banaji and Anthony G. Greenwald (Delacort Press, New York, 2013).

Summary:
“Implicit bias may operate outside of awareness, hidden from those who have it, but the discrimination that it produces can be clearly visible to researchers, and almost certainly also clearly visible to those who are disadvantaged by it.” (See p. 209.)  It is appropriate to start this summary with the last sentence in the book, as we see race, gender, religion, anti-immigrant, and other forms of discrimination playing out in our schools, communities, and headlines daily.

The authors gently and cleverly build their defense of this thesis by starting Chapter 1 with optical illusions and word association tests that surprise research participants and readers alike.  They call these “mindbugs,” the illusions we cling to or memories we create because our mind does something implicitly, without conscious thought. 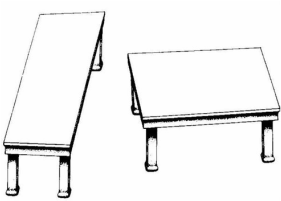 Moving on, they detail their development of the Implicit Association Test [IAT], including samples in the text for readers to take or directing us to their online site at Project Implicit.  (See discussion pages 42-47.)  This test uses timed word association tasks to reveal hidden biases to members of different categories: Black, White, male, female, young, old, gay, straight, etc.

Cautious researchers, Banaji and Greenwald explain their studies that confirm two important points, referring to results of 75% of those who take the IAT (no matter their background):
1)   “automatic White preference is pervasive in American society” (p. 47),
2)   and “automatic White preference… predicts discriminatory behavior even among research participants who earnestly… espouse egalitarian beliefs” (p. 47). 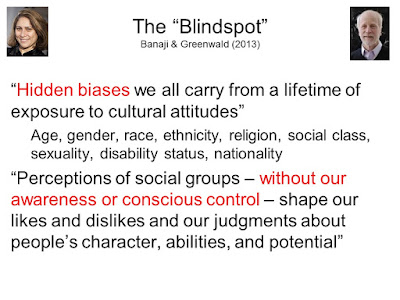 Banaji and Greenwald further explain race IATs as well as IATs regarding overweight people, elderly people, gays, etc.   They express their (and others’) dismay that even when we espouse our wish to treat all people equally, we all harbor unconscious biases.  With an aim to help us make this knowledge powerful in our efforts to overcome automatic biases, they further explain the human tendency to categorize and create stereotypes.  They conclude: “stereotyping is an unfortunate by-product of the otherwise immensely useful human ability to conceive the world in terms of categories” (p. 89), and they recognize the potential harm of this tendency.

The authors express a direct connection to police killings of black men, asserting, “‘[G]uilt by association,’ a Black = weapons stereotype is particularly consequential when it plays out in the interaction between citizens and law enforcement” (p. 106).  We have only to look to Ferguson, Baltimore, Minneapolis, and Dallas to update the unfortunate example to which the authors refer: that of the tragic death at the hands of police of Amadou Diallo in 1999.  They reference Claude Steele’s work (Whistling Vivaldi) and also discuss how stereotyping affects women in the workplace and in higher-level math classes. 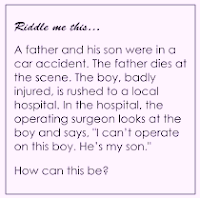 In a chapter entitled “Us and Them,” Banaji and Greenwald discuss human babies’ development of preference for the familiar—usually people with the same racial identity as themselves.   They discuss our human tendency to be able to identify individuals of our own race versus those of different backgrounds.  Finally, they discuss how easy it is for humans to form in/out groups.  They conclude the chapter with examples of where this early imprinting and in-versus-out-group mentality can lead: “[I]ntergroup discrimination is less and less likely to involve explicit acts of aggression toward the out-group and more likely to involve everyday acts of helping the in-group….  [W]e may fail to see the far more pervasive ways in which hidden biases maintain the status quo, depriving those on the bottom rungs of society of the resources available to the more privileged by birth and status….  Blindspots hide both discriminations and privileges…” (See examples and discussion pages 140-144.)
In a chapter entitled “Outsmarting the Machine,” the authors describe ways around these automatic biases (blindspots), including so-called “blind auditions” that led to an increase in hiring of female musicians by major orchestras.  Human minds are malleable, they remind us, as they describe promising research that hidden biases can be weakened by overt counter messages showing Blacks, women, and the elderly in positive light, for example.  Finally, they describe policy solutions: in which unconscious biases in doctors, for example, could be overridden by policies recommending standard treatment for all types of people.  (See pages 149-155.) 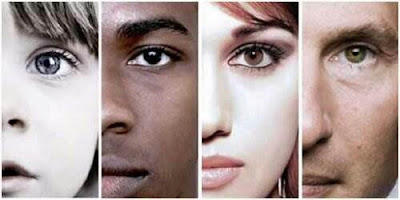 The appendices are crucial reading.

In Appendix 1, the authors track Americans’ overt racism.  They provide evidence that overt racism may be less, but hidden bias remains pervasive and harmful.

Appendix 2 is also worth studying and sharing.  In it, the authors provide seven conclusions of their research (and the overwhelming body of research of colleagues):

1.    Black disadvantage exists (in housing, hiring, healthcare, criminal justice, monetary transactions, etc.).
2.    The disadvantage experienced by black Americans is at least partly due to race discrimination (especially due to the repeated small effects of “minor” acts of discrimination, for example).
3.    Social differentiation exists. (Humans are good at and instantly do stereotype.)
4.    Attitudes have both reflective and automatic forms (and these may not agree—even in the same person’s mind).
5.    People are often unaware of disagreement between the reflective and automatic forms of their own attitudes and stereotypes.
6.    Explicit bias is infrequent; implicit bias is pervasive.
7.    Implicit race attitudes (automatic race preferences) contribute to discrimination against Black Americans.   The authors site an overwhelming body of research evidence that “widespread acts of discrimination against Black Americans that have put them at a disadvantage in just about every economically significant domain of life.”  (See Appendix 2, pages 189-209.)

1.    Have students explore their own implicit biases by visiting Project Implicit (https://implicit.harvard.edu/implicit/education.html) and taking the race (and other) Implicit Association Test [IAT], developed and explained by Mahzarin R. Banaji and Anthony G. Greenwald in Blindspot: Hidden Biases of Good People.  Use the Blindspot to help students put their (likely) racially biased test results into perspective.  Explore other ‘isms with them: gender bias, ageism, size bias, etc.

2.    Read Malcolm Gladwell’s response to taking the Race IAT for the first time, excerpted from his interview with Oprah Winfrey.  (See page 57.)  Ask your students to write their own reaction to their own IAT results.  You may wish to read Gladwell’s statements after your own students have written their responses.  Inviting students to share their responses may lead to a heartfelt bonding opportunity for your students.  However, you may want to preface the IAT and this writing with the following activity.

4.    Read with students this short article from Pacific Standard Magazine in which a small study asserts that mindfulness meditation may have promise in countering the negative and pernicious effects of hidden bias.  https://psmag.com/mindfulness-short-circuits-reflexive-racial-bias-ac77baf07c34#.lk4rr8ybb
5.  Follow up with Rhonda Magee's article on her work developing ColorInsight:  http://greatergood.berkeley.edu/article/item/how_mindfulness_can_defeat_racial_bias. Use links and sidebars to try exercises she contends may help us think more mindfully rather than acting on our reflexive racial biases.  Some are truly moving.  (“[C]onsider that the person before you has known love. Inwardly recite the phrase ‘Just like me, this person has loved, and has been loved.’ And, ‘Just like me, this person has known pain and loss.’”)

6.    Older students can explore corporate and scientific applications of bias research after reading this article from Workforce: http://www.workforce.com/2014/02/09/you-biased-no-its-your-brain/

7.    Host a school reading of Whistling Vivaldi (See my blog summary with activities: http://thinkcareact.blogspot.com ) or Blindspot.  Read excerpts of either book to your classes and discuss.

8.    Host a showing and discussion of the movie Hidden Figures at your school, or read and discuss the book Hidden Figures: The American Dream and the Untold Story of the Black Women Mathematicians who Helped Win the Space Race: (Background story and movie trailer here) http://www.popularmechanics.com/space/rockets/a24429/hidden-figures-real-story-nasa-women-computers/
9.    Discuss the portrayal in the media of various groups: Black, White, Asian, Muslim, Jewish, male, female, transgender, young, old, gay, straight, differently abled, rich, poor, etc.  What stereotypes are promulgated?

10.    Make sure your classroom walls abound with positive images of a diverse array of human faces.

What can we do to overcome these blindspots in our students and ourselves?

Everything we can think of.

Susan Gelber Cannon
I am an educator with over 30 years of classroom experience practicing multicultural, character, global, and peace education and developing teaching methods to empower students to think, care, and act for the greater good. Praising my book, peace educator Ian Harris wrote: “Peace can be taught in practically every discipline if teachers truly concerned about the fate of this planet and its inhabitants have resources like this book to guide them.” Significant online discounts are available at IAP: http://www.infoagepub.com/products/Think-Care-Act.